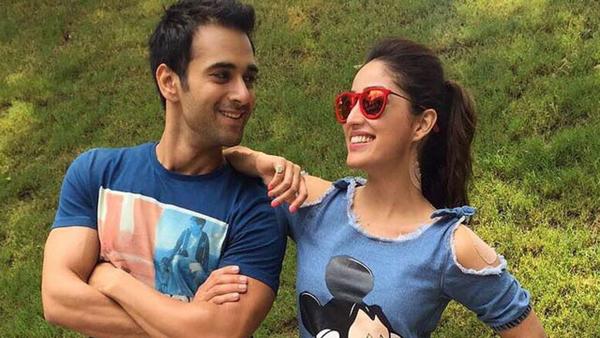 Yami Gautam and Pulkit Samrat were the talk of town when they started dating. It was while shooting together for Sanam Re that we started hearing rumours of their off screen relationship. They were seen together everywhere, so much so that it affected Pulkit's new marriage with Shweta Rohira. Pulkit's status of being married was the reason why this new relationship became a talking point in the media.

Now that they have split, Yami and Pulkit are again the talk of town. Everyone is analyzing their relationship and breakup. A section of the emdia is reporting that Yami broke off with Pulkit because of his angry temperament, insecurities etc. Her parents are also said to be against this match.

But another section of media has reported that this break-up is the result of Salman Khan's influence over Pulkit. It is noteworthy here that Pulkit's wife Shweta Rohira is Salman Khan's rakhi sister. Naturally Salman would want to intervene! It has been reported that Salman invited Pulkit to his 50th birthday bash and treated him really nicely. Instead of using any words to discuss the delicate matter with Pulkit, Salman Khan just showered him with niceness, subtly hinting at what he expected of Pulkit.

It is being said that Pulkit is ready to give his marriage another chance, even though he has filed for divorce. He has given some statemnets in media talking nicely about his wife Shweta, this is what may have kindled these rumours. Though it is unclear what lies in store for Pulkit Samrat and his wife Shweta Rohira, it is definitely over between Yami and Pulkit!

Kriti Kharbanda Confirms She is Dating This Actor!

Yami Gautam in the Angrakha Sari is Elegant Glamour!!!

Yami and Pulkit reunite for their upcoming flick Junooniyat

Divya Khosla Kumar confessed:‘Sanam Re’ has elements of my personal life

If Salman Were The Finance Minister!
LATEST EVENTS / GALLERIES
Most Read
...loading