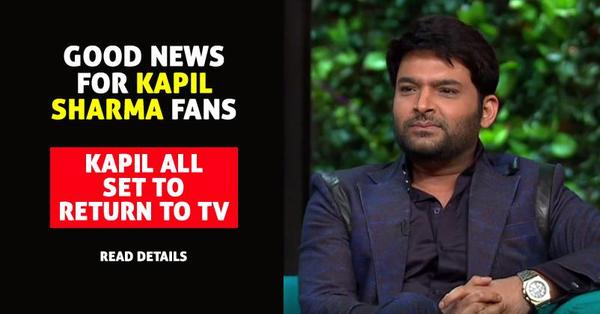 Kapil Sharma is no doubt to be one of the best comedians India has ever seen. Are you excited for Kapil Sharma’s return to television? While all are wondering if they will see Kapil Sharma in The Kapil Sharma Show, please now that it is not the case. Kapil Sharma will be coming up with a new show and finally, we have some suspicion as to what it might be all about.

Sony Entertainment Television has shared a small teaser proclaiming the comeback of one of TV’s most-loved comedians. However, the details of the show are yet to be uncovered. In the small video, we see Kapil trying to hire an auto-rickshaw but the driver snubs him off reminding the actor-comedian that he is yet to pay his dues. When Kapil says he will soon pay off all dues, the driver makes a snide remark and says, “Kaha se doge, kaam dhandha to hai nahi tumhare paas?”

After a laborious 2017, Kapil Sharma is returning to the small screen with a game show which will soon be released once the show is aired. Nonetheless, Kapil, who has started shooting for the comeback of his TV show, is optimistic. “I feel very nice that people love me so much. I wanted to come on TV, and not even dreamt of being in films. Now, I have done both...I feel very nice and hope this love keeps pouring and I keep on doing the good work,” said Kapil.

According to the media reports, new Kapil’s show is inspired by an American game show, The Hollywood Squares. This unique concept will involve two contestants, who will indulge in a game of tic-tac-toe to win cash and prizes. The American show was seen on NBC in 1965 and later became a regular series in 1966. The board for the game is a 3-3 vertical stack of open-faced cubes. A celebrity guest will take a seat right in front of the desk of each contestant which will be followed by questions and answers. The show will also include a lot of comedy and jokes.

We wish all the best to Kapil for his new venture. Are you excited about the show?