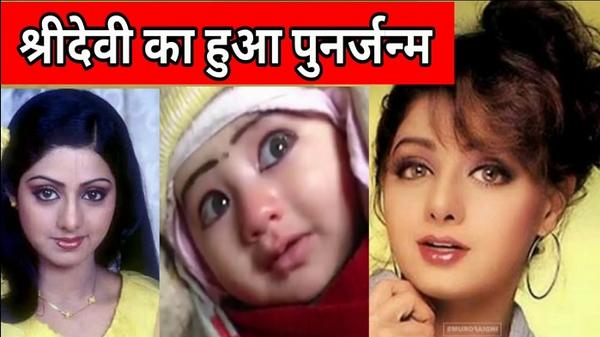 The whole nation is mourning upon Sridevi’s sudden demise, however, the news channels are showcasing some weird headlines that are worth criticizing.  A video of a baby is going viral on the internet which says that she is the rebirth of the actress Sridevi.

The video is spreading like fire as it talks about the conspicuous likeness of the baby girl with the iconic star.  Tez TV aired a video of a baby, joined with the question: “Kya Sridevi ka punar janam ho chuka hai? (Has Sridevi been reborn?)”.

Well, for those who are dwindling and dropping for the rebirth child video, please know that the video is a fake video. The video has got more than 1 crore views in less than 24 hours as fans believed that she is Sridevi’s rebirth.

Media releasing the video has created a lot of anger amongst the people for showing insensitivity towards to iconic actress. The screenshot from the video went viral and many people targeted their angst towards the channel for claiming such things.

It seems like people should grow up and stop emphasizing news just for TRPs. Don’t you think the same?

Sridevi, Jhanvi And Khushi Attend IIFA Magic Of The Movies

Sridevi At The Inauguration Of The INOX Theater

Sridevi And Family Spotted At Airport

Sridevi Kapoor On The Latest Cover of Filmfare August 2012