A Simple Hack in Meerut Saved Over 100 Litres of Milk on Shivratri! 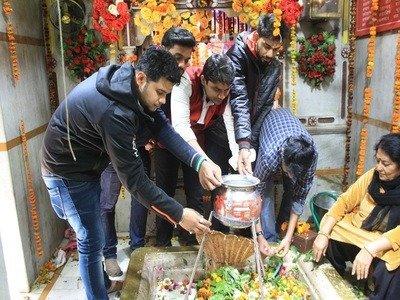 Every year we see thousands of litres of milk poured over countless Shivlings across the country on Shivratri. It has often been debated that this milk could have been used to feed the poor and hungry children instead of being just poured over a diety in the temple. There have been arguments both against this thought and also in favour of it. But this year we saw something else - we saw CHANGE!

In the small city of Meerut, a group of young boys devised a single hack that allowed devotees to pour milk over the deity and yet it saved over 100 litres of milk in a day - which was then donated to an NGO that cares for orphan children.

It was not just these 5 youths who brought in this change. They found support and acceptance from an unlikely source - a temple preist, who allowed them to carry out this experiment in his temple on the big day. This is what the boys said, "Devotees pour milk on the kalash which is placed right above the shivling. We made two holes in the kalash — one on its base and the other one at a certain height. The kalash had a capacity of seven litres. So we devised a system which ensured that after one litre of milk trickled down on the shivling, the remaining six litres flowed into a container through the pipe attached to the second hole. The apparatus was set up on a steel tripod stand attached to the shivling. We spent only Rs 2,500 to develop this system. We will be uploading videos on our Facebook page ‘India Against Hunger’ so that it can be replicated by people in other cities."

Kudos to these kids and to the preist who helped bring in this change. We certainly need more people like them - who usher in change instead of just talking about it on TV channel debates!

3 Reasons to Switch to Almond Milk

Priyanka Chopra: Amitabh Bachchan's professionalism is worth compiling in a book

Anushka Sharma taught me how to be poised: Virat Kohli

Every parent wants their kids to get settled, says Suniel Shetty on nepotism