Why is Everyone Talking About Priya Varrier? 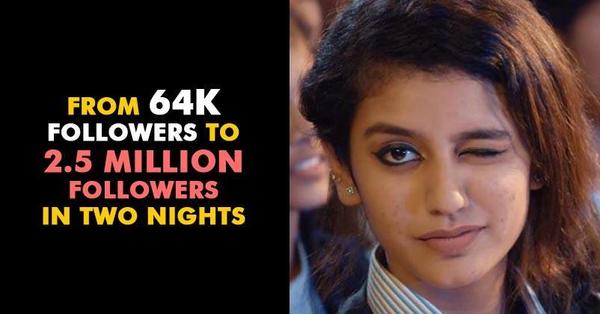 The recent Internet sensation Priya Varrier is the news of the nation. The girl from Kerala is actually streaming waves on the Internet with her wink from a movie clip that is running viral in this Valentine season. A video clip of Priya, from her upcoming film Oru Adaar Love, went completely viral. However, the young actress says 'that the wink was natural and she never thought that video clip would become such a hit.' In an interview to a media channel, Priya Prakash Varrier said, "Actually, the director wanted to capture something cute between me and my hero. So he told me if I can do the eyebrow thing and wink at him. I told him that I could give it a try. That's how it worked out. It was spontaneous and we hadn't planned anything."

"I never thought this would become such a sensation. Everybody told me that it was good. But I never expected it to become a big hit," Priya added. On being called the nation's new crush, Priya said, "I am very happy and exciting. So many people falling in love and all that, it's new but I'm very happy."

The viral clip is from a song titled Manikya Malaraya Poovi from the film Oru Adaar Love. In the song, Priya is shown as flirting with a fellow student (co-star Mohammed Roshan), who gets overwhelmed by the wink and smile.

We want more of Priya Varrier in the upcoming Indian movies. Don't you?

Guess Who Was the Most Searched Person on Google This Year?

Priya Prakash Varrier is Back in News!

Giorgia Andriani: Was quite nervous working with Arbaaz Khan, But the Process turned out to Be Really Amazing

Arbaaz Khan on portraying a role in 'Sridevi Bungalow', says makers guaranteed that they weren't doing anything wrong

Priya Prakash Varrier stuns in a blue ruffled top on the cover page of a magazine; Take a look

Priya Prakash Varrier was never even considered for Ranveer's Simmba