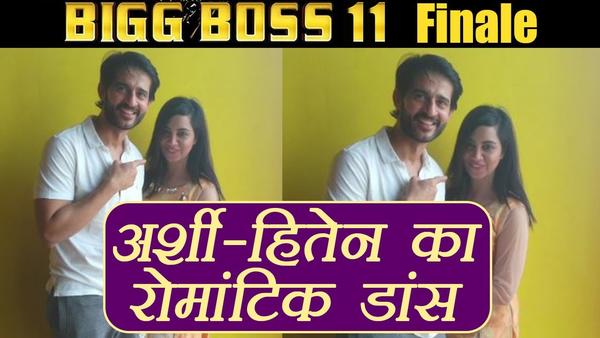 Bigg Boss season 11 is about to come to an end and our expectations are going high for the contestants to become this season’s winner. With the excitement to know the season’s winner, another most exciting thing to root for the BB finale is to see Hiten and Arshi dancing together on a romantic number for the first time on stage.

Bigg Boss 11's former contestants Arshi Khan and Hiten Tejwani's cute repartee inside the house was much treasured by audiences. The model never missed a chance to flirt with Hiten and their chemistry left everyone sniggering. Now, the cute Jodi of the Bigg Boss house is all set to reunite for the final act. Yes, you read it right. Arshi and Hiten will be seen performing together for a romantic act and are currently rehearsing at a studio in Andheri Mumbai.

Arshi was recently spotted hanging around with Luv Tyagi and Bandagi Kalra. Hiten after his eviction from the show headed to Pondicherry for a holiday with his wife and kids. It will be a treat to watch the lovebirds inside the house to shake leg on the stage of Bigg Boss this season.

We are very excited for Arshi Khan and Hiten Tejwani romantic number. Are you rooting for the finale showdown?

Which Housemate Will Be Evicted This Week?