Guess Which Film Will Have Kangana Working with Amitabh Bachchan. 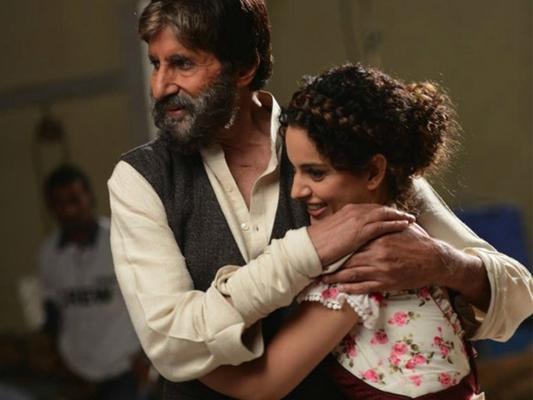 Our fiery queen Kangana is in a row of making us all go wow with her movie choices this year. The latest news that is making some hot headlines is that Kangana will be working with none other than Amitabh Bachchan in her upcoming project with R. Balki.

R Balki’s next movie after Pad Man, is set to star Kangana Ranaut and Amitabh Bachchan. This is the first time the two actors will be working together. According to a media report, Ranaut will play Arunima Sinha, an amputee who has climbed several mountains across the world, including Everest. Bachchan will reportedly be seen as the mentor of Ranaut’s character.

“Kangana had already been roped in for the Arunima Sinha biopic. But the film showed no signs of kick-starting. So when Balki offered her this project, she was keen to come on board. The film revolves around a woman who is left handicapped after a freak accident and eventually reclaims her life,” a source to the media house said.

Kangana and Amitabh Bachchan will begin this film after they wrap up the films they are currently shooting. Amitabh Bachchan has Thugs of Hindostan and 102 Not Out whereas Kangana is slated to begin work on a thriller after Manikarnika.

We are waiting for the collaboration of Kangana and Amitabh Bachchan on the big screen. Aren’t you excited?

Teji Bachchan: The Last Of The Stalwarts

R Balki: I do films for entertainment, not for any social purpose

Amitabh Bachchan and wife Jaya to pair up on screen again?

R Balki to bring together Big B and Tabu

Kajol,Amitabh Bachchan in Balki’s next?

Amitabh and Jaya play themselves in Balki's Ki & Ka