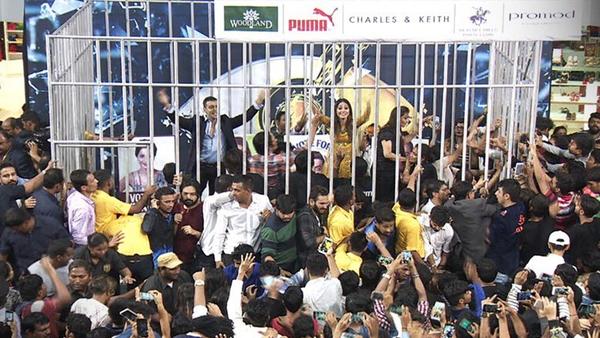 For a moment the housemates believed that this meant there would be no eviction this week. But then they were told that the eviction would be on basis of a live voting task at a mall in Mumbai. So Shilpa, Hina, Vikas and Luv were taken to a big shopping mall in Mumbai, where they were swamped by innumerable fans, trying to catch a glimpse of their favorite celebrities. Though the result has not been announced yet, thsi amll task has become a controversial task for the Bigg Boss fans.

This hashtag has been doing the rounds ever since this task was revealed. Fans of Luv Tyagi feel that this task is meant to eliminate Luv Tyagi from the show. How can a commoner from Gurgaon get votes from the local population in Mumbai when pitted against big celebrities like Hina and Shilpa? This thinking has some truth to it because the supporters of Luv Tyagi are largely based in North India and can obviously not come to a Mumbai mall just to vote for him!

Do you think this is an unfair attempt to eliminate Luv Tyagi from BB11?

Kartik Aaryan shares an innocent-looking picture of Chintu Tyagi; says he will always stay closest to my heart

Pati Patni Aur Woh posters: Kartik Aaryan aka Chintu Tyagi is always 'Right' even if his heart is on the ‘left’

SRK shows AbRam the difference between boating and voting

Saif Is Back In His Rustic Action Avtaar!
LATEST EVENTS / GALLERIES
Most Read
...loading