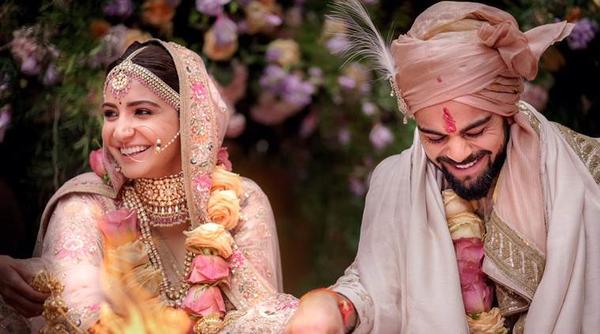 Anushka and Virat and now a married couple. It is official and not rumor, finally, Indian cricket team skipper Virat Kohli has tied the knot with Bollywood actress Anushka Sharma in Milan, Italy. And the fans have already gone crazy over the news of the couple and their wedding extravaganza.

According to media reports, the couple got married in a private ceremony, and have only close friends at the wedding, that includes Shah Rukh Khan and Aamir Khan.  The couple is expected to host a profligate wedding reception at a hotel in Mumbai, later.

Earlier in an interview with a leading channel, Anushka said that even though she is an actor she is a simple and normal girl with ambitions to lead a simple and normal life. It seems like Anushka is finally ready and it’s time for a graceful event to celebrate the marriage life of Virat and Anushka.

For the marriage ceremony, Anushka and Virat flew off to Italy with their families and sealed the deal by tying the knot of marriage with each other. The marriage ceremony was on December 10.  The two have been dating for years now, and have always given their fans couple goals. They're fondly called Virushka, by their fans.

Finally, it is a happy ending for more days to come for Virushka. We congratulate the couple and wish them all the success in the coming future.

Virushka Set to Be Parents in Early 2021!

'What Women Want 2': Saif Ali Khan feels Virat Kohli - Anushka Sharma is the other celebrity couple that is acing a 'modern marriage' concept

Virat Kohli on team India’s win: It was a special gift for my wife Anushka Sharma

Ahead of World Cup 2019, Virat Kohli opens up on how Anushka Sharma has made him a responsible person

Virat Kohli shared a picture of the two sharing a passionate kiss on Instagram!

Virat and Anushka's super cute couple's dance at their reception

Anushka Sharma And Virat Kohli Snapped At The Domestic Airport

Meet the Cutest Couple in Bollywood!

Marry Me, Up in the Air!