Telly Actors Share Their Thoughts About 'Hina Khan in BB11' 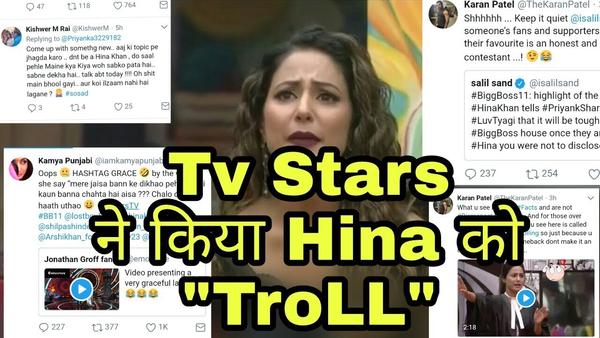 Bigg Boss is no doubt to be one of the most controversial serials in India. With the recent season making news every day, the show has made many other people as their bait for conversations in the house too. One of the contestants of the house Hina Khan is creating a lot of stir across the country.

Hina Khan in her own head considers herself the most honest, fair and entertaining player, not everyone agrees. Here we have some of the Telly actors sharing their thoughts about Hina Khan in BB11.

Hansika Motwani tweeted when Hina made some comments on South film actresses, “Doesn't she know a lot of Bollywood actors hv worked & are working in the our south industry! Shame on you #hinakhan for trying 2demean us”

Sayantani Manisha tweeted: “A sad task #BB11  !’ It’s built to disrespect a woman n our so called lady of the hour @eyehinakhan who has posts on social media of her workouts revealing her abs points out dat #arshi does push ups with men ! This girl can really stoop n how! Even in a task show some sense!”

It seems like most of the celebs from the television world are not liking the attitude that Hina portrays inside the house in Bigg Boss.

What do you think, are you a supporter of Hina or you are also joining the celebrity community to hate her for her attitude inside the house? Well, stay tuned with Bigg Boss season 11 to get more spicy updates.

Cannes 2019 photos: Hina Khan in pink pantsuit is nothing but classy!

Day 2 In The Bigg Boss House