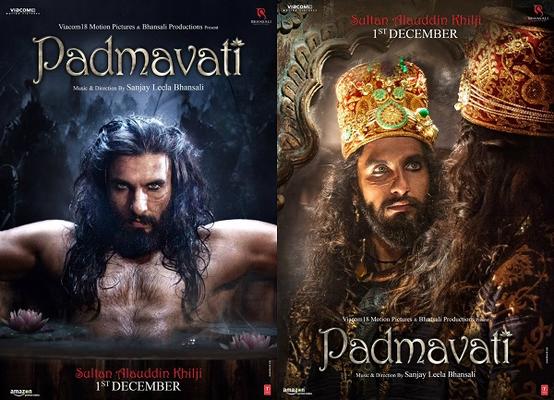 The most awaiting movie of this year is Padmavati. The movie that has been a part of Sanjay Leela Bhansali’s dream project is now going to be out for the public to imagine the extreme epicness of the creator’s story.

Earlier, last week two posters were out and released for the movie Padmavati and it was no wonder that the posters made us all go awestruck. With a grandeur opening that the posters are getting from the public, it is sure that the movie will do the same after its release in December this year. In the first poster, Deepika was seen in a regal avatar and the second poster Shahid Kapoor was seen as Maharawal Ratan Singh. Recently the third poster of the movie was out and we cannot imagine the epicness of the poster which is breathtaking.

Bhansali seems to have reserved the best for last. The third and the last poster is of Ranveer Singh as Alauddin Khilji. The third poster has literally got everyone talking. The makers have managed to get more than the desired effect with Khilji’s look. Ranveer literally came and captured everybody with his intense look. The poster of Ranveer as Khilji ruler is an intense combination of great acting and body language.

These posters make the wait for the film’s teaser all the more difficult. The film will get a grand release on 1st December 2017. Are you waiting for this movie?

With So Many Threats Against it, Will We Ever See Padmavati?

Padmavati in 3D: Sanjay is Leaving no Stone Unturned for this Film!

Ranveer Singh is a Bisexual in Padmavati?

Did you know? Ranveer Singh was not willing to play Alauddin Khilji In Padmaavat, Find out the reason

Ranveer Singh: Padmaavat will always be a gem in my Filmography

The CBFC too is on the edge after passing Padmaavat

What! Ranveer Singh's injury is good news for Padmavati makers: Find here why

Ranveer Singh: Padmavati is my biggest challenge yet as an actor