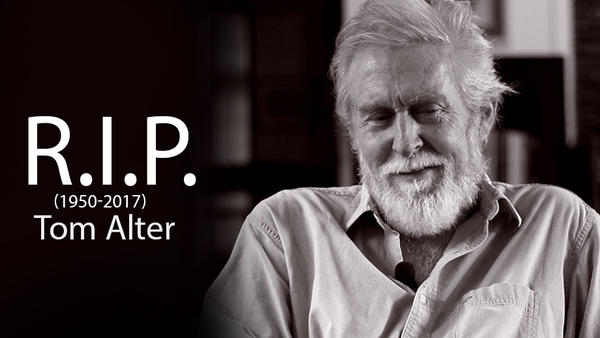 Tom Alter, a well-known actor in India passed away on Friday. The Padma Shri awardee Mr. Alter has always had a flourishing career right from his first entry into the entertainment business in India. Tom Alter, the American-born Indian actor whose accomplishment in TV, theatre and cinema earned him the Padma Shri award in 2008, died at his Mumbai residence on Friday. He was 67.

India has lost another star from the entertainment business. A statement released today on behalf of Mr. Alter's family said, "It is with sadness we announce the death of Tom Alter, actor, writer, director, Padma Shri, and our dear husband and father." Mr. Alter was taken to Saifee Hospital earlier this month with stage four skin cancers, for which he had been treated earlier and which had relapsed.”

Tom Alter appeared in over 300 films. He is known for starring in television shows like Bharat Ek Khoj, Zabaan Sambhalke and Betaal Pachisi and also had a flourishing career on stage. He played some keen roles in successful films like Gandhi, Shatranj Ke Khiladi, Kranti, Aashiqui and Parinda, and was the author of three books, including Rerun at Rialto and The Longest Race.

Tom Alter's manager Ismail Ansari told the media outlets that the actor's cremation was performed in Mumbai's Worli today. "The cremation was done in Worli. His close family members were present. Raza Murad and some directors from the industry were also present to give their last goodbyes to the soul.

We abide our goodbyes to Sir Alter and may his soul Rest in peace.

Celebrities in this Article: Tom Alter

PeeCee Got The Padma Shri Too Soon?

Priyanka comes to get Padma Shri