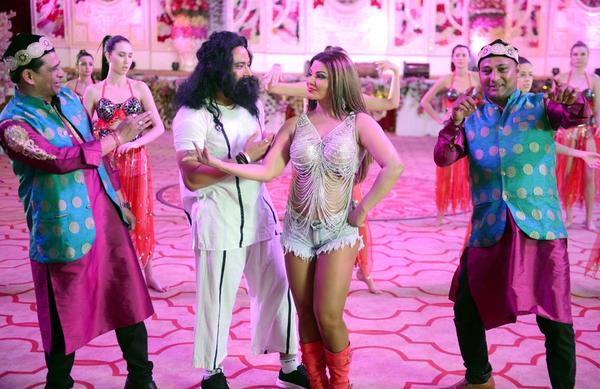 The entertainment world is going way higher in making some bizarre movies. Lately, if we go with the news that is making controversies uplift the cinema world is that there will be a biopic on DSS Chief Gurmeet Ram Rahim Singh Insaan. Yes, you heard it right, the rapist who is now in Rohtak jail is about to get his biopic on screen and the more shocking part of the news is that the movie will be produced by none other than Rakhi Sawant.

In a recent interview, Rakhi has disgraced the baba for his nature and his bad deeds and has made a plan to open up her disgrace in public by producing and acting in a biopic movie on DSS Chief Gurmeet Ram Rahim Singh Insaan.

In a recent media interaction Rakhi said, Yes, I’m playing Honeypreet as I have known her for seven to eight years. I know everything about her. I believe she is in London right now. My brother Rakesh Sawant and I are producing the film. She further added “I’m in Delhi right now. We will be shooting here only. Our set will be exactly like his Sacha Sauda. I promise my audiences that ‘Main baba ki sab pol khol ke hi dum lungi’ (I will be relieved only after exposing him),”

We all knew that Rakhi is a publicity queen but her extension to gain publicity has surpassed the limit of sanity. Let’s see what more she has to say that we don’t know about Dera sarpanch in her movie.

Will It Be 3rd Time Lucky for MSG?

Akshay Kumar 'challenges' who can prove his meeting with Gurmeet Ram Rahim, Sukhbir

Amid Ram Rahim verdict riots, Sidharth asks people to follow his 'A Gentleman'

Baba Ram Rahim Was Popular in Bollywood too!