Expect Fireworks during Diwali season With the Clash of Golmaal and Secret Superstar. 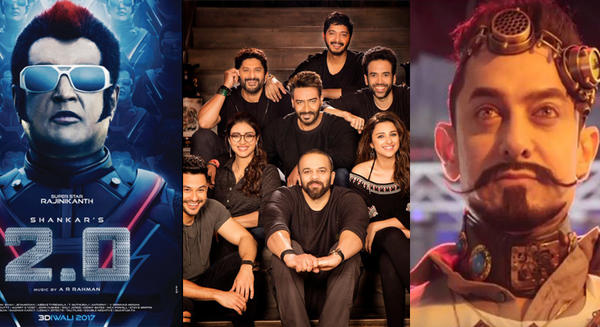 Diwali is a time where we see movie clashes and Bollywood dhamakas. This year is no different. This year you can expect fireworks during Diwali with the clash of Golmaal and Secret Superstar. The big budget banner Rohit Shetty and Aamir Khan will be facing each other in this year’s mega clash at the box-office.

This Diwali, the ticket window is about to by stand a bit of agitation and madness as two big budget films will clash at the box office. As if the clash of Aamir Khan’s Secret Superstar and Rajinikanth’s mega film 2.0. wasn’t enough to confuse the moviegoers, the announcement of Rohit Shetty’s Golmaal Again just dropped in to make the clash more interesting.

Secret Superstar is a movie made under Aamir Khan Productions that revolves around a story of a girl who makes her attempts to outburst her desire and dream to become a singer and a youth sensation. And Golmaal 4 is the old continuation of the hit Golmaal franchise that has laughter and fun intact in full.

We are waiting for both the movies to light up the movie theatres with entertainment and joy. Aren’t you excited?

Look Forward to a Big Clash This Divali!

How do you plan to celebrate this Diwali?

Shahrukh Vs Ajay Devgn: Who Will Rule This Divali?

Parineeti Chopra: I will stand up and defend Arjun till the day I die

Aamir and Ajay avoided a mega clash between their films, Secret Superstar and Golmaal Again

Zaira Wasim and Aamir Khan rocks in the 2nd poster of secret superstar!