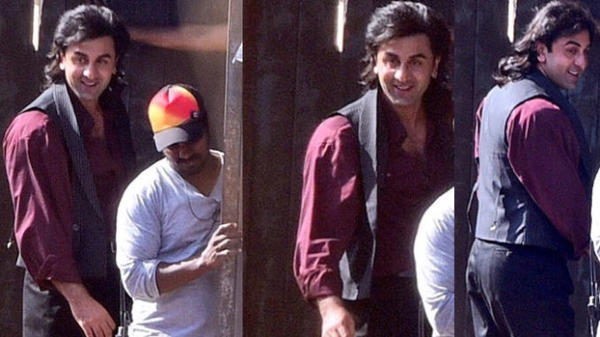 Ranbir Kapoor is one of the finest actors in the Bollywood business. The superstar who is known for his acting and looks is now getting ready for his new upcoming movie which is a biopic on Sanjay Dut’s life. Ranbir is playing the role of Sanjay Dutt and is all ready to beat our imagination of perfection and preparation.

If you have seen the pictures that are out from the sets of Ranbir’s recent movie shoot, you will not recognize the star. Ranbir has completely transformed and look like Sanju Baba. Ranbir has gained some extra pounds and has beefed up for the role for real.

The lean chocolatey boy Ranbir Kapoor was asked to bulk up as he plays Sanjay Dutt in the upcoming biopic, helmed by Rajkumar Hirani. After extreme practice and work out Ranbir now look like a doppelganger of Sanjay Dutt and actually gained some heavy muscles. Ranbir has undergone some extreme workouts to get the desired shape for the role.

Kunal who is the trainer of Ranbir rightly said in an interview that, “It’s weight training with no cardio. Sanjay Dutt got his beefy look after years; for us to replicate that, naturally took some time.” He further added, “We couldn’t make Ranbir look that fat so we bulked him as much as we could with the help of prosthetics to make him look older. He has gained more than 13 kgs now which is all muscle and no fat.”

Ranbir has always experimented with his looks but the kind of transformation that he has gone through for Sanjay Dutt’s biopic is very inspiring. We can’t wait to see the movie on the screen. We really appreciate the efforts that Ranbir has portrayed in order to get the correct shape for his upcoming biopic movie on Sanjay Dutt.

Ranbir Kapoor: I was born to play the part of Sanjay Dutt in his biopic

Ranbir Kapoor: Sanjay Dutt hasn’t been a hypocrite about his life

Oh no! Ranbir Kapoor may land in jail