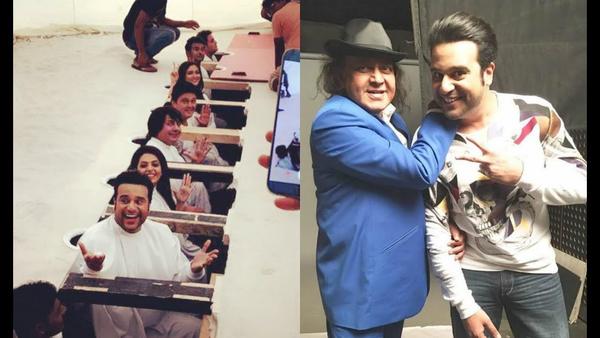 The Television is buzzing with news that is hard to handle at this moment of time. Kapil Sharma’s rival comedian friend Krushna Abhishek is going to make a come back on the small screen with a bang and this is no good news for Kapil’s show.

Krushna who has been part of comedy business for a decade now is about to make us laugh again with his new show The Drama Company. The show, as some you of you might know will be displayed on Sony TV. The show will also feature previous Ex members of ‘The Kapil Sharma Show’ like Sugandha Mishra, and Ali Asgar, apart from other talented artists like Sanket Bhosle and Sudesh Lehri.

And the bigger cabala to Krushna’s new show ‘The Drama Company’ is that it will mark the debut of Bollywood actor Mithun Chakraborty in comedy genre on Indian TV. Now, with such strong cast and crew, we think that The Drama Company has a good chance of walking away with better numbers and rankings than The Kapil Sharma Show. As we all know that TKSS has not been doing great in the rating department after Kapil Sharma's very public fallout with former TKSS member Sunil Grover.

The show 'The Drama Company' as rumored will broadcast on the same channel as the Kapil’s show and will make a new era of comedy every day. It is a big competition that Kapil has to handle to keep his show on the top of the charts in terms of TRP. So, are you all excited for Krushna’s new show?