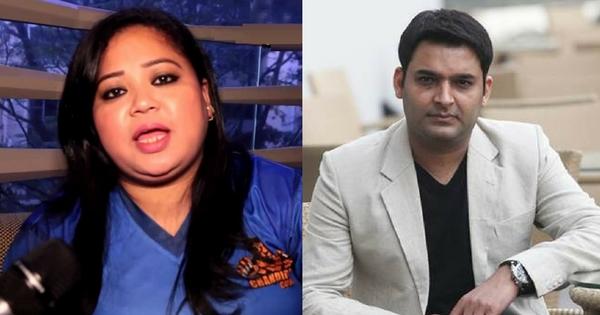 Nothing is going well with the ace comedian Kapil Sharma. Kapil is making headlines every day and there are controversies lining up almost every next day with him and his show. The Kapil Sharma Show is again in the headlines of media forums after the long going rivalry between Kapil and Sunil Grover. The show is making front page headlines in the media platform and all for bad reasons. The show which was once the highest-earning TRP show amongst many competitive channels is lagging behind in terms of gaining public appreciation and TRPs.

Recently Bharti who is very well known for her witty and jolly mood was about to be a part of The Kapil Sharma Show. Bharti is no doubt one of best female comedian of our nation and it would have been very splendid to see her in the same show sharing space with Kapil. But it seems that Bharti has canceled her first-day shoot for the show and had called the show's environment not good.

With Bharti joining The Kapil Sharma Show would have made the show regain its position in the hierarchal list at the top. But now, we have learned that even Bharti is not willing to shoot for Kapil's show, and has apparently canceled her shoot.

Bharti was seen in an impassioned negotiation with Kapil Sharma’s team. She was not pleased with her entry scene. Well, Bharti disapproved her entry scene and wanted it to be rewritten.” With heated debate of her disapproval with the script writer of the show, cancelledBharti walked off the sets and her canceled.

Well, Kapil needs to make amends with his colleagues or else the show is about to get demolished because of poor TRP and bad mouthing.

Bharti Singh didn’t cancel the shoot: Nothing seems to have gone off between Kapil and Bharti

WHAT? Bharti Singh denied to shoot with Kapil Sharma