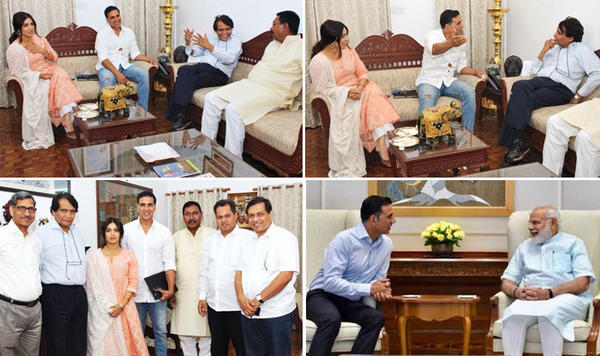 Akshay Kumar’s upcoming movie “Toilet Ek Prem Katha” is making a buzz around the nation. The concept of the movie revolves around the topic of cleanliness and education. The movie has a core theme of promoting Swaach Bharat Abhiyan that was initially started by our Prime Minister Narendra Modi. The movie is gathering all publicity and accolades from the point the trailer got launched and even the Prime Minister of our nation has shown his respect and acknowledged the thought of promoting cleanliness in the form of movies on the big screen.

Before the movie promotional binge starts for Akshay Kumar’s Toilet Ek Prem Katha, the actor met Prime Minister Narendra Modi and presented his film and explained how it is inspired by Modi-led Clean India campaign.

During Akshay’s meeting with PM Modi, Akshay was thrilled about his movie. After the meeting with PM, Akshay twitted, “Met PM @narendramodi and got the opportunity to tell him about my upcoming ‘Toilet-Ek Prem Katha.’ His smile at just the title made my day! ” the actor’s tweet read.

Akshay Kumar’s film revolves around the topic of promoting about hygiene and the need to have a toilet in every household to reduce wellness issues among women and children. Directed by Shree Narayan Singh, the movie focuses on the need for toilets for cleanliness in the country, and this message is conveyed via a love story.

We are eagerly waiting for the movie to hit the big screen. We really appreciate the work ethics of Akshay who has always promoted social awareness through the medium of his movies.

How to Protect Your Family Against Toilet Plume

Love Begins With A Toilet!

Akshay Kumar revealed that 'Toilet: Ek Prem Katha' is close to his heart, her why

Pix: Akshay and Bhumi in Mathura for the shoot of Toilet Ek Prem Katha