Salman Promotes Cycling, But Can You Switch to Cycling Really? 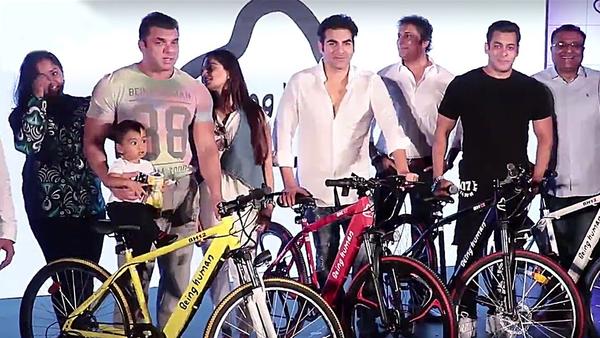 Salman Khan loves to ride a bicycle, and this is not the first picture of him with a bike. He has often been photographed on a cycle on Mumbai roads or in studios. Recently Salman cycled his way to an event where he launched Being Human eCycles. Salman not only cycled to the event from his flat in Bandra, he even got his two brothers to join him. Adding the cuteness quotiesnt, nephew Aahil also made his way to the launch event. All this was done to mark the Environment Day and promote bicycles amongst our country men and women.

It is indeed a noble thought. Cycles keep us fit and they don't cause any pollution. What's more, they don't cost much eiether!

But is it possible to cycle to work in a big city like Mumbai or Delhi, especially if your place of work is 20 km from your residence? What about the pollution that engulfs you as soon as you step out on the street? The biggest problem: where is the space for cyclists on our busy Indian roads? Everyday we hear of some accident involving pedestrians and cyclists. Is cycling really safe? It is easy for a star like Salman to cycle on the roads as his bodyguards clear the way for him, but for the regular folk - it is more of a hassle and danger than a way to be fit and happy!

Abhinav Kashyap Said What Everyone Thinks About 'Being Human'!

7 Reasons Why Your Period May Be Late

Get Set to PEDL in Hyderabad!

Would You Like to Buy a Being Human e-Cycle?

Abhishek Bachchan Turns Cyclist at an Event in Nashik