Things to Expect When You Travel by the New Tejas Express. 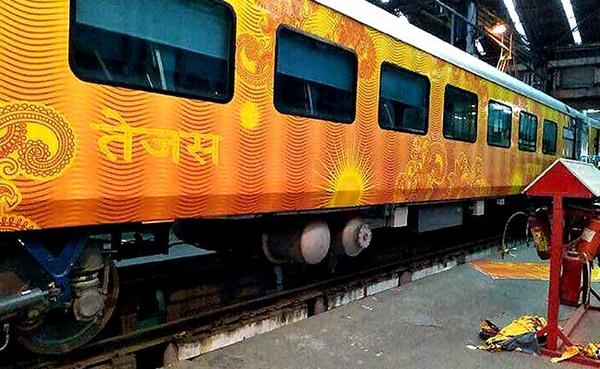 Indian Railways have always made attempts to improvise the traveling experience of people who prefer railways as the major means of transportation. The brand new Tejas Express that was making news around the nation for being the fastest train from Mumbai to Goa has made it's first go and the experience was breath-taking.

It was a procession-esquire debut for the India's newest Tejas Express when everyone started their journey in the bright yellow train. The much anticipated Tejas Express was headed from Mumbai to Goa. The train started half an hour behind schedule, but to everyone's surprise reached minutes before its arrival time at Karmali, about 15 km from Panaji.

Tejas is India's fastest train that is capable of running at 200 kilometers per hour. On Monday, it became the fastest train on Konkan Railway touching 120 km per hour. The excited passengers aboard said that they felt like they were traveling in an airplane on the tracks.

If you are planning to travel by the new fastest train of India, you can contemplate various amenities during your travel. The new Tejas Express will offer wi-fi along with LCD displays that will blazon information but will majorly be for relaxation purposes. The fares for the Tejas will include the catering services. The Tejas will serve the best food prepared by celebrity chefs.

The coaches of the new Tejas will include interspersed displays, digital destination boards, and electronic passenger reservation charts. Inside, the train will also feature water level indicators for the bio-vacuum toilets, sensors taps, and hand dryers.

This new reformation of the train will change the face of Indian railways at an international level.

First Run of Tejas Express Shows Us What We Really Are!

Amitabh Bachchan to be face of Railways’ initiative, will convey special message to save lives