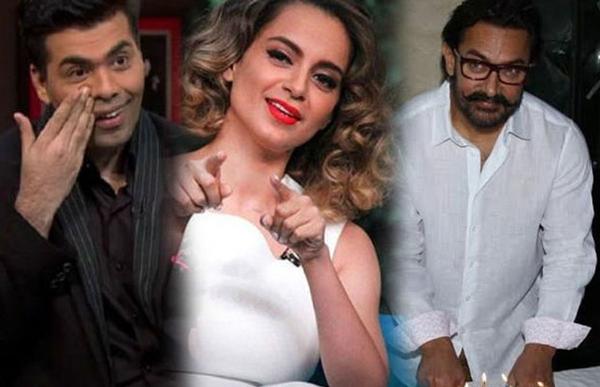 The range of nepotism is the discussing topic these days in B-town. The debate on nepotism is not novel in the film industry but with actor Kangana Ranaut and Karan Johar recently depicting daggers after the Queen star called him “the flag-bearer of nepotism,” the discussion has renewed. We all remember the remarks and comments that Kangana made on Karan Johar on his talk show KWK that is making its rounds all over the Bolly world among the elite group of people. These remarks on nepotism have brought the lighting truth of partiality that runs within the industry.

When during an interview Aamir Khan was asked about his comments on the recent cold war between Miss Queen and KJO and his understanding about nepotism in the industry. Aamir addresses the issue without pinpointing anyone in general and said to the press that, "What does nepotism mean really? It's a very natural human tendency... you are asking me in general? Not specific to the issue right? I think it's a human nature to love and help for the people you care for. It's a very natural thing. It can be someone who is a part of your family or someone you deeply care for."

He further added that he tries and ensures that he doesn't cosset in nepotism by keeping emotions aside when he is working. He said that "I try and make sure in my work I don't. My responsibility is towards my audience and I give them the most amount of importance. I try not to bring emotions in my work,".

Well, to some extent we agree to what Mr. Khan said about nepotism. We just can’t consider the one side of the coin until we know the other side’s value. Let's see if Kangana has any better answer to counterfeit both Mr. Khan and Johar.