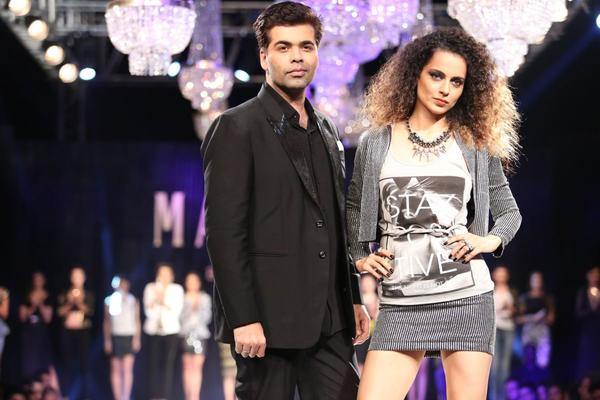 The buzz around is strong when it comes to Kangana. The entertainment business is a platform that portrays your personality and can also take a dig on whatever statement you make in public. Well, this time it's Kangana who is in amidst of criticism for her dig and statement that she made in a very popular TV show Koffee with Karan.

Whatever Kangana may speak, it is true that she is an outsider who made a place in the B-town with her striking performances in these recent years. Contrary to her statements that she makes are sometimes not in favour of people she speaks about and this time it is Karan Johar.  In a recent Karan Johar's talk show, Kangana's statement and declaration have pissed the producer/director.

In a recent media event when Karan was asked about his views on the allegations that Kangana made on the show, Karan response was bit sturdy and pitching, Karan said, “Everyone keeps quiet while she says what she has to say - not out of respect or fear but embarrassment. She has clearly misconstrued silence for acceptance and has continued to dig her grave among the film fraternity.” Kangana has always blamed the industry for being biased when asked about Karan's view on Kangana's take on the industry, Karan said, if it is such a bad place, Kangana should leave the industry, you can't constantly badmouth your workplace. After a point, it’s obscene.

Well, to inform you all, this feud started from the talk show where Kangana did openly make verbal statements against the host saying him to be the “flag-bearer of nepotism” and a “snob”.  She also called him “movie mafia”.

This time the rusty declarations and bold statements are making some undiscoverable fortune for the Queen actress. We are eagerly waiting for Kangana's take on Karan's dig at her. Aren't you?