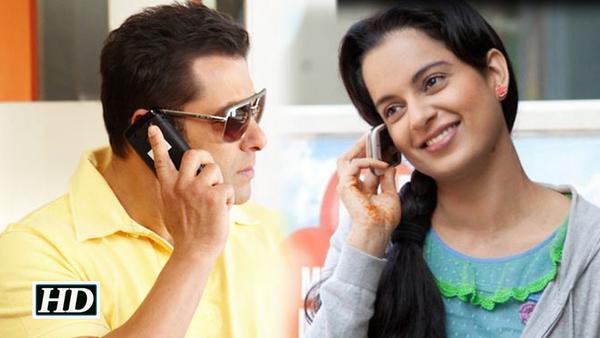 Everyone knows that Salman Khan does not forgive easily. He is like his big giant shadow in Bollywood that can make or marr someone's career within minutes. It came as a big shock to everyone when Kangana Ranaut refused the lead role in Bajrangi Bhaijaan. Not only was it a big opportunity missed, it was also an act of displeasing Salman Khan! An ever bigger shock was in store for the industry when Kangana Ranaut refused Sultan. It was then that there was talk of a Salman-Kangana enimosity.

We cannot help but admire Kanagna Ranaut's guts for refusing two such big projects, both of which have gone to do very well at the BO. But in doing so, Kangy has earned Salman's ire, which is not a light burden in Bollywood.

It seems that the two have now burried the hatchet. As Kangana was busy doing a promotional shoot for Rangoon in Mehboob Studios, Salman was also shooting in the same place. Both met outside and got talking. It seems all is okay now. We might even see the two work together soon, hopefully. One question remains, why did Salman forgive Kangana so easily? Did he find our lovely Queen so irresistible?

Kangana Will Be A Fat Bride!

SRK opens up about refusing a film with Kangana

Will This Guy Get a Break?
LATEST EVENTS / GALLERIES
Most Read
...loading