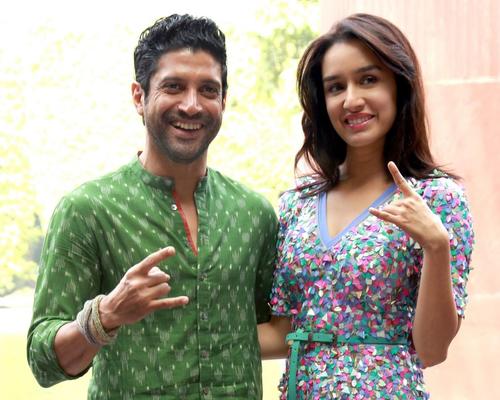 The Shraddha Kapoor and Farhan Akhtar romance has been talked about for quite some time. It is not unusual for the lead actors of a film to be linked together while they work on the project. It does build up a bit of public interest and contributes to the success of the film as well. But when the rumours go on even after the film's release, there is usually something real to the story. This is what is happening with Shraddha Kapoor and Farhan Akhtar. The stories just don't seem to be anywhere near coming to an end!

Recently there have been many reports of Shraddha moving in with Farhan. It has been reported that Shraddha's parents do not approve of this relationship. So Shraddha packed up her bags and just moved  in with beau Farhan Akhtar at his new apartment. Shraddha has previously been spotted at the apartment along with pals Arjun Rampal and his wife Mehr. It was further reported that this move did not go down well with the young actress' parents. So Shakti Kapoor, the popular Bollywood villain, turned a real life villain and forced his daughter to come back into the family home. It was reported that Shakti Kapoor, along with his sister-in-law Padmini Kohlapuri, appeared at Farhan's apartment and forced Shraddha to come back home.

Is it true? Shakti Kapoor has given a statement denying these rumours. He says, "That’s total crap! It’s all s**t. Somebody else also called me to inform me about this, but don’t believe it. It’s total, total, TOTAL crap. I have been in this industry for over 35 years now. I know what happens so we don’t react to such things. It’s okay."

She may or may not have moved in with Farhan, but something is definitely cooking here!

Find out the real reason, Why Farhan Akhtar and Aditya Roy Kapur fight over Shraddha