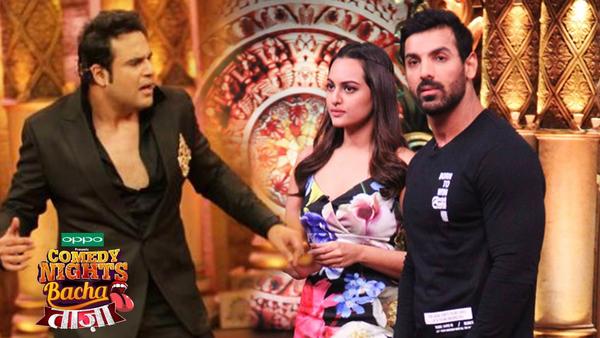 John Abraham is busy promoting his next film Force 2. He recently went on the Comedy Nights Bachao Taaza show to promote his film with Sonakshi Sinha. As expected, John was pot on the roasting chair and Krushna poked fun at the gorgeous hunk. Many jokes were cracked about John's acting skills, and this upset the actor. He walked out, leaving the shoot halfway.

Krushna Abhishek has said, "I was cracking jokes on his earlier films like Paap. That's when he told me that those were his favourite films. Sometime later, when he refused to shake a leg with Sonakshi and me on stage, I realised that he was upset. He soon walked out and I ran after him, but he left. I want to apologise to him; I haven't slept since the last few days because of this. I specially flew down from my shoot in Kulu Manali because John had agreed to be on the show. I hope he understands and forgives me. John and I have known each other for many years now and he is the only Bollywood actor who called me when my father passed away recently. I am really sad that I upset him."

It is really hard to understand what celebrities expect when they agree to go to a roast comedy based show. Recently another actor Tannishtha Chaterjee had done the same thing on Bachao and had said a lot of things about why she was made fun of for her dark skin. She did not like jokes about her dark skin. John did not like jokes about his acting skills...the lack of them to be more precise. So what can Krushna Abhishek joke about in the show?

It is very sad that our celebrities take themselves so seriously that they cannot even take a joke or two about themselves. Why do they agree to appear on the show when they don't have the sense of humour to take a few jokes?

John Wants To Get Married!

How Expensive a Medical Goof-Up Can Be?

Krushna Abhishek and Kashmera Shah on having kids via surrogacy, 'we struggled to have them'

John Abraham: I would love to get back to Dhoom

John Abraham: Sonakshi is fearless, I am proud of her