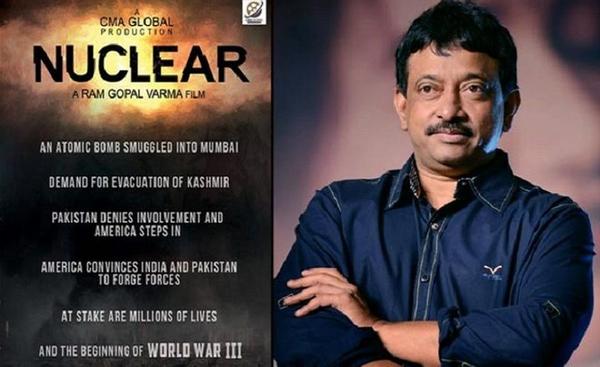 Well, we know Ram Gopal Varma, the same person who is known for his trolling comments on social media gossips. Mr. Varma who had directed some critically claimed movies like Sarkar and Company has a new news for the world media.

Ram Gopal Varma never ends to shock us. Most of the time it’s because of his nasty tweets but this time it is his announcement of a bizarre movie that probably will be directed by him.

Well, if we consider Ramu’s say then it is to be believed that there will be a movie named Nuclear which will be directed by him and the movie will hold a budget of INR 340 Cr. While we were still adjusting with his Arvind Kejriwal inspired character in Sarkar 3, he made the most unexpected announcement ever. The director who has a lot of trinkets like Satya, Rangeela and Company to his credit, is soon going to direct a World War 3 drama. Yes, you read that right.

This is no rumour because he himself took the twitter to announce it. Ramu on his tweets also mentioned that the movie will be the highest budgeted movie in the Hindi cinema and Nuclear to be shot in America, China, Russia, Yemen and India with American, Chinese, Russian and Indian actors. He further mentioned that Nuclear is produced by CMA GLOBAL who did a long term tie up with his Company for 15 films.

Well, for now, we can only forestall on how the movie will turn out when it gets shaped. Though we are astonished on the bizarre proclamation about the movie with INR 340 Cr by Ram Gopal Varma, we still wish him good luck for his upcoming projects.

After Stupendous Success of Sanju, RGV to Show you the Real Story!

Thanks to corona, birthday boy Ram Gopal Varma is all alone in lockdown!

This star will be in Ram Gopal Varma's next flick

RGV says I regrets most of my cinematic outing with Big B, except for the Sarkar series

RGV: Sarkar 3 is full of grey characters, none of which can be called as a hero or a villain