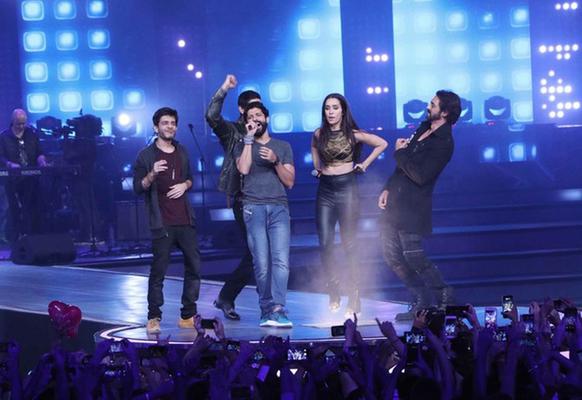 We all have been waiting for the Rock On sequel to get release on theatres. It has been few days after the teaser got released, since then most of the movie lovers are awaiting patiently to its silver screen outburst. We all know that the movie will spin around music and bands with drama in between just similar to what we saw on the first part of the movie. To our surprise we will have an extended cast in this sequel. After the teaser got released the buzz was about the exclusive presentation of the music album of the movie on a live concert medium.

The cast of Rock on 2 launched their music album in a very unique way on Sunday. A live concert was organised by the makers at NSCI, Mumbai where the actors charmed the audience with their performances. The concert was a success and a best new way to reach out to masses in general. The audiences were stumped when the Rock On 2 star cast graced the show with every surprise element to fortify. They made sure that the crowd has an amazing time.

The live concert was adorned with amazing performances and superb awestruck singing. In a candid interview, Shraddha expressed, "It was an awe-inspiring sensation to perform at a recital for the first ever time. The night turned out to be an epic one because of the lovely audience we had. They kept cheering us on song after song. I’m definitely looking forward to doing more such things!’”.

We are astounded and thrilled by how the show turned into a great hit and we wish that the movie is also going to be a money spinner in the business after its release.

A glimpse of Rock On 2

The Teacher you Liked most and the Ones you Hated?

Even Celebs Have Problems!

Is Your Blackberry Working?
LATEST EVENTS / GALLERIES
Most Read
...loading