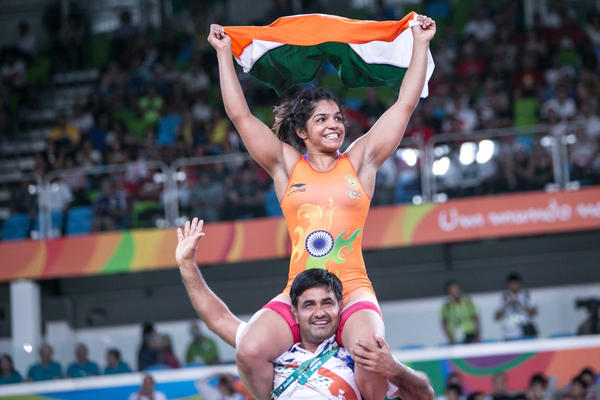 Sakshi Malik has created hostory by winning India's first medal at the Rio Olympics. After a severe drought of medals from the Indian contingent, Sakshi Malik won us a bronze medal in Women's Freestyle 58 Kg Wrestling by defeating Aisuluu Tynybekova of Kyrgyzstan.

Sakshi is a 23 year old girl from Mokhra village near Rohtak in Haryana. Her village has produced many male wrestlers but she is the first female wrestler from her village. She is the first female wrestler to win an Olympic medal for India. Talking about her win the young woman said, "I have stood up to the hopes of the country for the first medal. I was confident that I can win in the end even being down. The last two hours were the most difficult for me thinking whether the medal will come or not. This is the first time that a medal has come for women. It’s a success of my 12 years of dedication. My hard work has succeeded."

We are so proud of you Sakshi, more power to you girl!

PV Sindhu Brings Us Our First Silver From Rio

Something To Look Forward To In Olympics...

Another Legend Passes Away in Bollywood