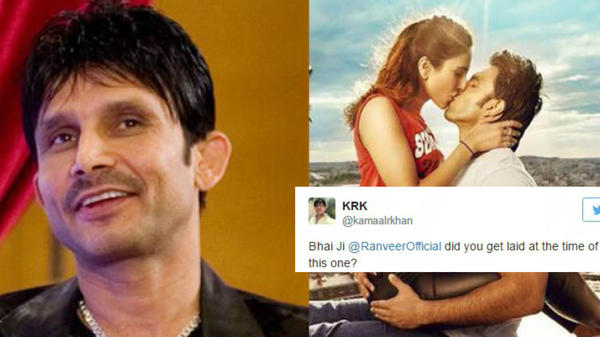 KRK aka Kamaal Rashid Khan is not new to controversy. In fact, his celebrity status owes its existence to controversy. After having started his entertainment industry career in 2007 with a Bhojpuri film he produced, KRK made foray into national TV with his stint in the Bigg Boss house in Season 3. The show gave him a lot of exposure, but unfortunately he came out seeming like a very negative and offensive person.

KRK is bent on maintaining that image. He has followed it up with a series of disgusting and offensive tweets. He has targetted various actors in the past including Twinkle Khanna, Alia Bhatt, Rishi Kapoor, sidharth Malhotra and Karishma Tanna.

The latest series of tweets are targetted at Ranveer Singh and Vaani Kapoor.

First he comments on the poster of Befikre with this tweet:

"Bhai Ji @RanveerOfficial did you get laid at the time of shooting this one?"

Then he followes it up with:

"If you want to say bad about most hottest babe in Bollywood Vaani Kapoor then come n say in front of me n I will break ur all the teeth."

So what does one say to such a demented and offensive person?

KRK Starts Another Controversy with Remark About Ranveer Singh!

KRK Finally Gets A Taste of His Own Medicine

Parineeti Chopra: Arjun Kapoor and I are incredibly offensive with each other

How Quickly Can Yuvraj Be Back On The Field?
LATEST EVENTS / GALLERIES
Most Read
...loading