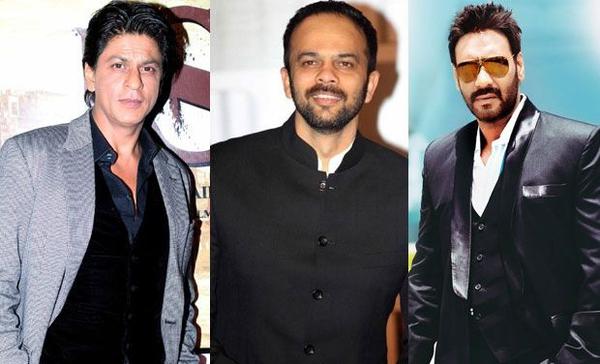 One is Kajol's husband, the other is her best pal; and they don't seem to get along very well! This is the story of Kajol, Ajay Devgan and Shahrukh Khan. Much has been said about the friction between Kajol's best friend and her darling hubby. But it seems that the cold war is coming to an end.

After their lunch meeting in Bulgaria, SRK and Ajay are all set to bury their differences and do a film together. This feat is the achievement of common friend and ace director Rohit Shetty, who delivers hits after hits. After the hugley successful film Chennai Express, Rohit and SRK have become good friends and keep discusing projects. So now it has been revealed that SRK will be co-producing Golmaal 4. It is also very likely that Ajay Devgan, who has been a constant in the franchise, will also work in this installment. So it is very likely that SRK and Ajay will share screen space!

Imagine what a patakha combo this will be: SRK, Rohit Shetty and Ajay Devgan! Fireworks!!!

Rohit Shetty has a desire to bring on screen real life couple Ajay and Kajol in a comedy film.

Ajay And Kareena At Singham Range Of Police Watches Launch

Ajay Devgan Promotes Singham Returns On The Sets Of CID

Ajay Devgan and Kajol On The Sets of Whirlpool Commercial Ad