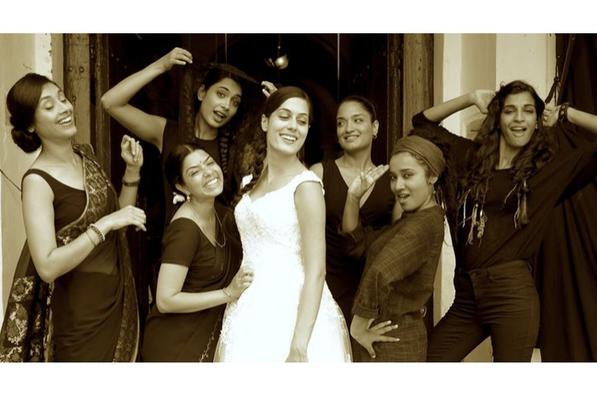 Meet these gorgeous 7 actors who star in the lead roles in film "Angry Indian Goddesses". You must have heard of director Pan Nalin who has a couple of popular films to his credit like the Valley of Flowers and Samsara. Pan decided he wanted to make a film based on dosti, yaari and life with Indian women in the lead. Come to think of it, we have so many guy bonding films but none based on girls...so far!

Pan Nalin has brought us female dosti on a platter with Angry Indian Goddesses. You will be pleased to know that the film is woven around these actors and there is really no romantic theme to expect. These young actors are not mainstream cinema actors, you will probably not recognize many of them, but this is a bunch of good actors nevertheless.

Sandhya Mridul, Tannishtha Chatterjee, Sarah-Jane Dias, Anushka Manchanda, Amrit Maghera, Rajshri Deshpande and Pavleen Gujral will together make sure that you miss no Khans and Kapoors in this film! Cheers to female dosti and yaari!

Is Non-Stick Cookware Safe for Your Health?

How Does Gordon Ramsay Scramble His Eggs?

Aamir To Work With Kate Winslet

Kiara Advani: Want to be known as Pan-India artiste

Prabhas: Have done a lot of homework for 'Saaho'

Beautiful Craft Out of Kitchen Scrub

Vegetable Lasagna in a Pan!