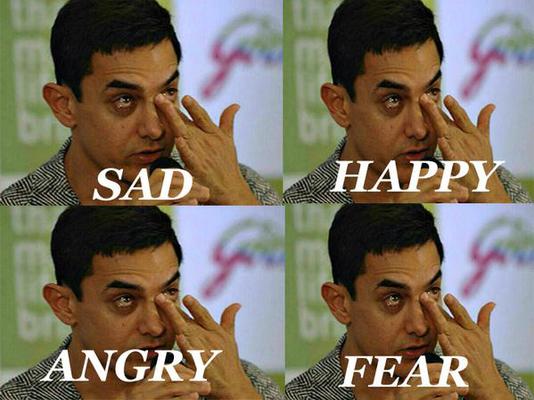 Aamir Khan, who was dubbed "Mr Perfectionist" a few decades back, has now earned a new title. He is called the Crybaby of Bollywood now. The crying trend began during the TV show Satyamev Jayate, where the whole country saw Aamir crying out to his heart's content in every episode. Many wondered if he was just giving an outlet to the supressed emotions of his matrimonial quarrels! But soon Aamir proved everyone wrong by crying bucketfuls of tears at every opportunity. He wept during the premiere of Bajrangi Bhaijaan, and also wept during the screening of Katti Batti -Imran/Kangana film.

So tweeples are having huge fun at the crybaby's expense, no reason why you shouldn't!

- Whenever Aamir Khan gets angry with somebody, he gives him a tearful

- Aamir Khan can cry even after watching Rahul Gandhi's speech.

- Aamir Khan does not cry in the rain because you can't see his tears then.

- Kiran Rao: I want to tell you something Aamir Khan: I am all tears

- Aamir Khan to be the official ambassador for CRY.

- What is the opposite of Laughing Buddha? - Aamir Khan

- Aamir Khan to play lead in remake of Rudali. This time it will be called Rudala

- In spare time, Aamir Khan gives coaching to 'to be brides' on how to cry during bidai.

Love you Aamir, for crying so much that you make us laugh!!!

Are You Putting Him Off?

Does Your Baby Cry Too much?

Aamir Khan Goes On A Pilgrimage

How To Stop A Baby's Crying