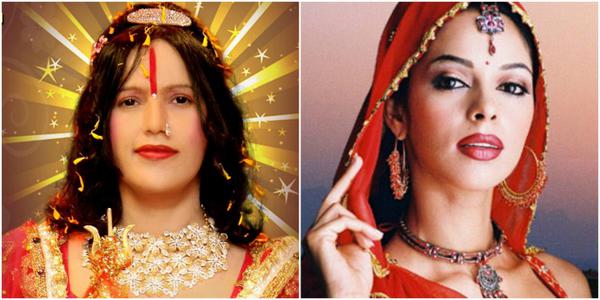 All fans of the currently controversial Radhe Maa have reason to rejoice. The self styled Godwoman will soon join the elite list of celebrities who have films made on them. She will join the elite group of freedom fighters like Mahatma Gandhi and Bhagat Singh, sportsmen like Milkha Singh and Mary Kom, and other famous people whose contribution to society has been etched on the big screen.

So there is going to be a film made on the life of much loved Radhe Maa, who is in her fifties but can easily pass for 30. She wears mini skirts and dances on Bollywood numbers. She blesses people and they feel their problems are melting away. Her fans love her with as much passion as her haters hate her with. Surely great masala for an interesting movie!

Mallika Sherawat is the actor who will play this role, interesting choice after Bhanwari Devi. Neha Dhupia, Rahul Mahajan and Dolly Bindra will also get to play some important characters in the film. Bappi Lahiri is the perfect choice for the direction of music as his penchat for glamour certainly matchers that of Radhe Maa herself!

Celebrities in this Article: Mallika Sherawat

Sonam and Anand's Wedding Pictures are the Cutest Thing on Internet Today!

Disha Patani on working with Salman Khan again in Radhe: Was on cloud nine

Salman Khan and Randeep Hooda in combat mode for Radhe

Govind Namdev joins the cast of Salman Khan's Radhe, to play a cop

Radhe: Randeep Hooda got injured while shooting an action sequence on the sets the film

Lara Dutta to step into Sridevi and Raveena shoes, will play a single mother in her next

Salman Khan: Sridevi is a bigger star than Khans and Akshay