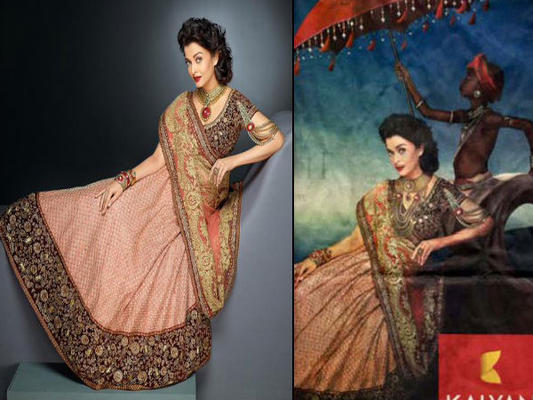 Former miss World and actor Aishwarya Rai Bachchan drew a lot of flak from the social media for her recent appearance in an advertisement for Kalyan Jewellers. Aishwarya and dad-in-law Bachchan have had a long association with the brand. In a recent print campaign, Aishwarya appears to be bedecked with jewels, lazily relaxing as an emaciated and dark skinned boy struggles to hold a large umbrella over her head.

The ad has been called racist, anti-child and in poor taste as it seems to favour child labour. Ash has had a lot of negative reaction from social media platforms. Her PR has clarified that the beauty queen did not shoot for the picture as it appeared. They say that the original image was modified by the creative and she never shot for the ad with an idea of the outcome.  The original photoshoot, according to them, had a dark background.

Amidst all the flak, Kalyan Jewellers have decided to withdraw the ad campaign. This is how they clarified their point, "The creative was intended to present the royalty, timeless beauty and elegance. However, if we have inadvertently hurt the sentiments of any individual or organisation, we deeply regret the same. We have started the process of withdrawing this creative from our campaign."

Which is more important creativity or quality?

Aishwarya Rai Bachchan At A Kalyan Jewellers Event In Trivandrum

Aishwarya In Surat For Kalyan Jewellers 2013

Aishwarya at the Launch of Kalyan Jewellers Showroom