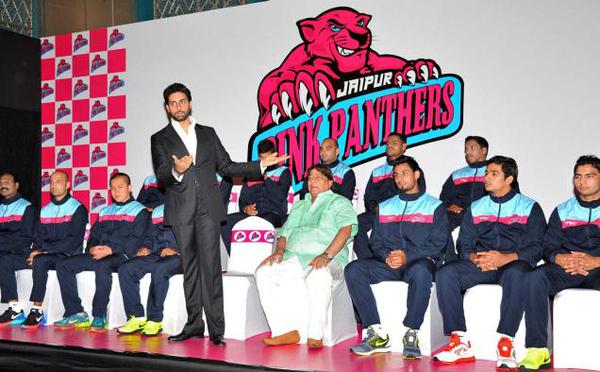 After the cricket leagues, another sport is now entering the sports league business. The humble Indian Kabbadi is being played in a money spinning league these days and Bollywood is involved! Abhishek Bachchan is now the proud co-owner of "Jaipur Pink Panthers". Is it just that owning a sports team is "in" these days? Or has AB junior finally realised that his Bollywood career is not taking off anytime soon?

It is great that Bachchan is promoting the Indian sport, and we don't mind if he makes a quick buck out of it! It seems that Bollywood has had an association with Kabbadi for decades. Abhishek played it in Yuva, his dad played it in Ganga ki Saugandh. Even Rishi Kapoor played it in Naseeb!

It's great that Bollywood is taking such interest in sports, but then who else has the money to own a sports team? But what's with the name "Pink Panthers"? Couldn't AB junior come up with something more original?

Celebrities in this Article: Abhishek Bachchan

Mumbai Firefighters Set to be Trained By Randeep Hooda in MMA.

Sports You Can Enjoy without spending too Much Money.

Every Woman Needs A Sports Bra!

Abhishek Bachchan to sport a new look for Manmarziyan?

Bachchan Family And Others At The Opening Ceremony Of ISL 2

The Mother-Daughter Duo Are Sporting The Jaipur Pink Panther Jerseys