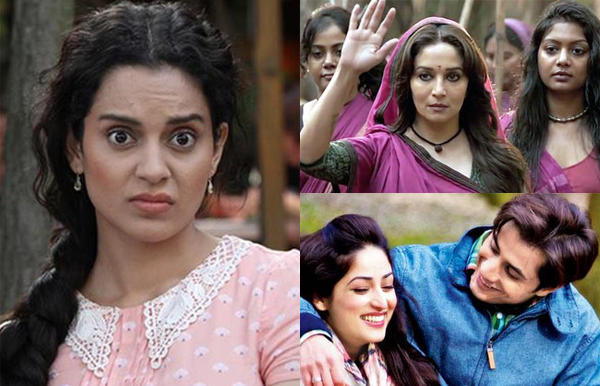 Gulab Gang created a lot of buzz as it was the first time that 2 of the most beautiful and talented actresses of Bollywood, Madhuri and Juhi, came together for a film. The subject was also an unusual choice, inspired by the real life Gulabo. But Gulab Gang could not deliver what it promised at the box office.

The story of a gang of women who wield axes and knives, lived in an ashram kind of place, and earned their bread by making handicrafts, did not find many takers at the box office.

Total Siyapa is what it promised to be, a nice romcom. It seemed inspired by Meet the Parents, and had its funny moments. But even this cute romcom did not do too well at the box office.

Kangana Ranaut's "Queen" saved the day! Kangana's performance in and as Queen earned her a lot of critical acclaim as well as success at the box office. Kangana completely rocked her role and had rave comments even from the Bollywood tweeteratti.

Talking about numbers, Queen led the weekend collections at 10 cr, Gulab Gang followed closely at 8.84 and Total Siyapa grossed 4.09 cr. This is what happens when you clash the release of 3 good films!

3 Reasons Why Tubelight Bombed at the Box Office.

This Diwali: Ajay Devgn, Rajinikanth and Aamir Khan to battle at the box-office

'Shivaay' is fighting back in the Box Office battle with ADHM

Movies Are Unexpected Success At The Box Office

Mermaid Makeup inspired by Pirates of the Caribbean - On Stranger Tides