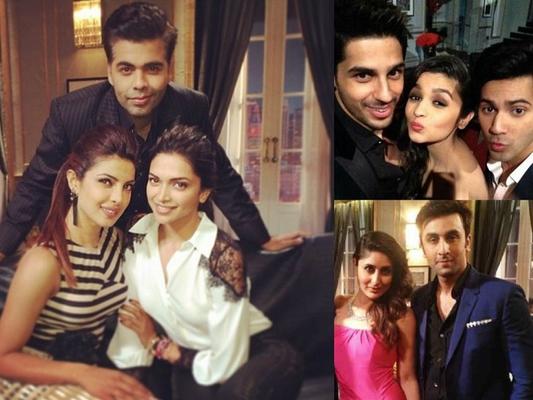 The 4th season of Karan Johar's chat show "Koffee With Karan" took off with a geat episode featuring Salman Khan. Salman kept the audience entertained with revelations about his personal life. Did you know he's still a virgin, or at least seems to believe so! The first episode of this season was a hit, and it seems like the following episodes will be every bit as interesting coz Karan has a very interesting line up of guests on his set.

Ranveer Singh and Arjun Kapoor feature &nbsp;in an episode where they also promote their film "Gunday."

Madhuri Dixit-Nene and Juhi Chawla who are working together in "Gulab Gang" will appear together on KJo's show.

Kareena Kapoor Khan and cousin Ranbir Kapoor shall light up the show with their witty one liners and catty revelations. Bebo shall also be seen teasing her bro about a certain Kat!

Who says actresses cannot be friends? The amiable bonding between Deepika Padukone and Priyanka Chopra will be there for all to see when they appear on Karan's show.

Freida Pinto and Nagis Fakhri shall be going on the Koffee datw with Karan together!

Sharing the secrets of "Shadi Ke Side Effects" will be Farhan Akhtar and Vidya Balan! This should be a very witty and interesting episode!

How can Karan ignore his own proteges, Alia Bhatt, Varun Dhawan and Siddharth Malhotra? The trio will also feature on KJo's show as young guests.

It will be a treat to watch, when Kapil comes to the show ‘Koffee With Karan 5’