Grand Masti - What Is The Audience Saying? 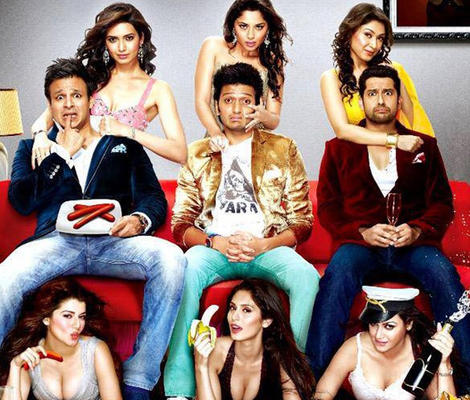 Everybody knew that Grand Masti would be an adult comedy. This much was clear from the teasers and promos that were on air since more than a month now. So, what are the critics and audiences complaining about it now? Yes, one can say that the movie does not break any new ground and it does not have a script or a coherent story line, but the jokes are cheesy and certainly comic.

'Grand Masti' as its predecessor 'Masti' goes into the same realm of young married men wanting to explore life outside marriage. Our heroes have a lot of pent up sexual frustation and their dreams come true when they meet at a college reunion. The rest of the movie is about these young men stepping outside their marriages. There is a lot of comedy, jokes, lewd cracks and sexual innuendoes.

The movie has taken a superb opening by collecting about Rs. 26 crores in the first two days. It is expected to rake in Rs.40 crore in its opening weekend making it the 4th biggest opening this year. The audience has given it a thumbs up!

We recommend that you go and watch this movie only if you like adult comedies. Do not expect 'neat jokes' or 'clean humor'. If you do not expect much, you will enjoy this movie which is really full of 'Grand Masti'.

Would You Like to See Sunny Leone in a Comedy Film?

Kapil Sharma will be roped in the Grand Masti’s next franchise?

The first look of upcoming comedy Great Grand Masti is out

Celebrities At Bash Of Grand Masti For Making 100 Crores

Mohit,Shraddha,Varun And Sidharth At The Special Screening Of Grand Masti

On The Sets Of Grand Masti