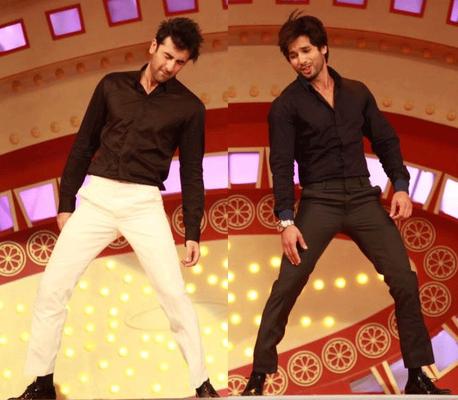 As he gets ready to release Shahid-Ileana starrer "Phata Poster Nikla Hero", Rajkumar Santoshi is getting ready to start the next project. It is well known that he has been working on the script of a sequel to his popular comedy Andaz Apna Apna. The film maker has been hoping to bring Salman and Aamir back together again with this sequel. But if rumours are to be believed, this might not be the case any more.

We have heard reports that Santoshi was really impressed with Shahid's comic timing in Phata Poster.... So he has discussed the Andaz Apna Apna sequel with Shahid and is considering Ranbir Kapoor to play the parallel lead. It is highly unlikely that Shahid or Ranbir would turn down such a meaty film. Santoshi is also considering the fact that youngsters would bring a fresh feel to his film.

However, this is what Santoshi said when contacted, "It's very early for me to take the call on the actors. I am still in the process of putting together the script, so wouldn't like to comment on the casting of Andaz Apna Apna 2."

PM Reaches out to Bollywood, Celebs Will Now Appeal to you to Vote!

The Unlikeliest Couple – Shahid and Rozza

Shahid And Ileana On The Sets Of Comedy Nights With Kapil

Shahid And Ileana On The Sets Of Jhalak Dikhhla Ja 6

Shahid And Ileana On The Sets Of Phata Poster Nikla Hero