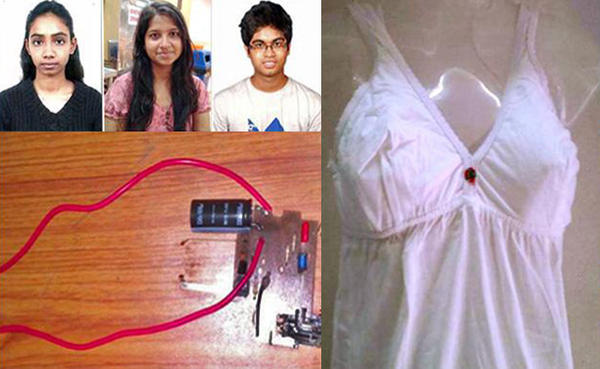 It doesn't seem like the police is doing anything to make Indian streets safer for women. It doesn't look like the judiciary is in a mood to punish the guilty in a quick manner. It doesn't seem like anybody really cares for the safety of Indian women. Is this how you feel? You won't have to rely on others for your personal safety anymore, thanks to 3 young girls. Inventors Manisha Mohan, Rimpi Tripathy and Niladri Basu are engineering students at SRM University and they have invented the Anti-Rape Underwear for Indian women.

What is the Anti-Rape Underwear? This is a camisole like garment that gives out an electric shock of 3800kv if it detects external pressure or force. If the attacker attacks again, this garment can give out 82 similar electric shocks that shall be enough to immobilize any attacker. The garment is also loaded with GSM and GPS so that a distress message (along with location) is sent out to the family of victim and the police as soon as the garment detects an attack.

The inventors are trying to look for fabrics that are washable and cheap so that the garment can be mass produced at an affordable price for the average Indian women on the streets. Good Job, girls!

5 Signs You Are About to Have a Heart Attack.

Do You Know The Symptoms of Heart Attack in Women?

Are You Having A Heart Attack?

John Abraham plans action franchise titled “Attack”, which will be the mother of all action films

Veteran actress Shakila passes away due to a massive heart attack

Actor Inder Kumar passes away after suffering a heart attack

Phobia star Radhika Apte reveals, I've had panic attacks in the past

Are Kangana hints to make a film on her acid attack victim’s sister?

9/11, Remembering One of the Worst Terror Attacks Ever!