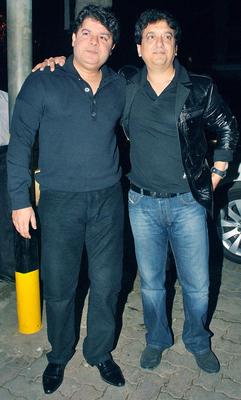 Sajid Khan has been booted out of 'Houseful 3'. The director who thought that he was infallible has had a fall-out with the producer of the super successful franchise - 'Houseful'. Everyone knows Sajid makes fun of and criticizes other people in the industry. But Sajid should know where to put a stop. Apparently such public criticism did not go down well with Akshay.

It is not surprising that Akshay did not take to this kindly and called up Sajid Khan and gave him a piece of his mind. Akshay reportedly even confided in his friends about this. Sajid Nadiadwala who is a very close friend of Akshay came to know about this and decided to give Sajid Khan the boot. Also with a super flop like 'Himmatwala' under his belt, who would want to work with Sajid Khan now?

All we can say is that this is not the end of the story. Keep watching this space to know who will finally direct the third instalment of the super successful franchise 'Houseful 3'

Sajid Nadiadwala: Nothing bigger than Salman Khan and Akshay Kumar coming together

Double role for Akshay in Housefull 4

Housefull 4: Sanjay Dutt to be the part of this Akshay Kumar starrer?

Sonakshi Sinha for Housefull 4: “I haven’t even met her, let alone offer her a role,” says Sajid

All is well between Akshay Kumar and the two Sajids: Housefull 4 on the board!

Akshay and Jacqueline spotted at 'Housefull 3' media meet in Mumbai

Brothers Gets A Great Opening!