So Is "Chashme Baddoor" Worth A Watch? 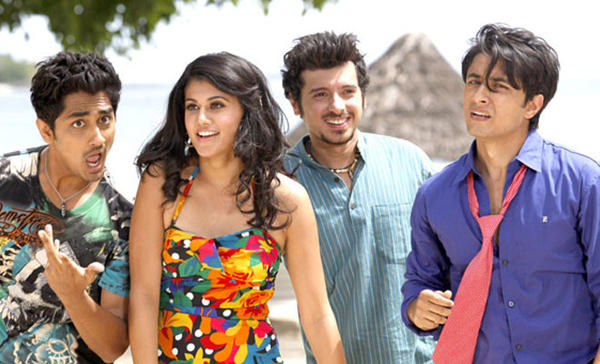 David Dhawan seems to have finally got rid of his Govinda handover! "Chashme Baddoor" is refreshingly different from David Dhawan's previous movies which starred Govinda with his inimitable style of acting and dancing. "Chashme Baddoor" a remake of the cult classic is nowhere near the original, but it does have its share of laughs and gags. Dhawan's use of loud and in-your-face humour does make you cringe at times, but it also does provide amusement to the viewer.

The story takes off with the three lead characters, Sid (Ali Zafar), Jai (Siddharth) and Omi (Divyendu Sharma) who are roommates sharing a rented home in Goa. Jai and Omi, the good-for-nothings spend their time ogling girls and trying to 'patao' them. In comes the new gal in town played by Tapsee Pannu and now they have their hearts set on wooing her. When they are unable to steal her heart and their friend Sid is able to woo her, their job is now to unsettle Sid's developing relationship with the gal.

The script writing is certainly not of the calibre of the original. You certainly miss the genuinely comic scenes of the original. Can you forget "Miss Chamko"? The new movie's dialogs are pedestrian, but the performances are heart-warming. The trio lead male actors give it their all and they do not disappoint. The female lead is cute. The movie has opened to a good response by collecting about 11.50 crores in the first two days. If you want to spead your evening being entertained, then do go and watch "Chashme Baddoor"

Sid and Alia: Broken Up Already!

David Dhawan: Coolie No. 1 not really a remake

After David Dhawan and Varun, Salman Khan to work with third Dhawan

Blackmail teaser out: Irrfan Khan at his quirky best in this hilarious promo

Taapsee And Other Celebs At The Audio Release Of Chashme Buddoor