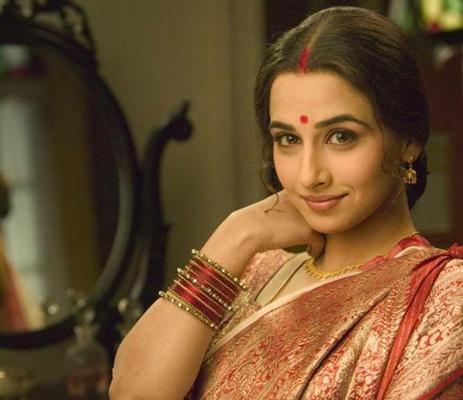 Vidya Balan has been chosen as 'The Best Actress' in the popular awards category at The Filmfare Awards this year too and her awards tally reads One National Award, Five Filmfare awards and Five Screen Awards. So what is it that makes Vidya such a hit at the Awards? What is it that gives her the tag of  "Female Hero"?

She is not endowed with the hour glass figure that most of the popular heroines in Bollywood sport and she has been called unconventional by most of the critics. In fact, she has received a lot of flak for her dress sense and figure. It was her role of an unwed mother to a 12 year old and gynaecologist in R.Balki's 'Paa' that changed her filmography. Vidya followed up her success in 'Paa' with Vishal Bharadwaj's dark comedy 'Ishqiya'. Vidya’s role as a sexually manipulative woman was a bold one and completely went against the conventional portrayal of women in cinema. This was topped up with 'No One Killed Jessica' the semi-biographical thriller which earned her rave reviews.

But it was Ekta Kapoor's 'The Dirty Picture' that made everybody sit up and take notice of Vidya. Playing the role of the controversial actress Silk Smitha, 'The Dirty Picture' was Vidya's boldest role and she played it with aplomb. And last year came 'Kahaani' the sleeper hit of 2012. The thriller set in Kolkata met with commercial and critical acclaim and has put Vidya right at the top. 'Memsaab' wishes Vidya a bright future and we wish to see her achieving greater heights of fame.

Vidya Balan: Awards seem fair when you win one

Vidya Balan At The Innovation For India Awards 2014

A Collections Of Vidya Balan In Saree Stills