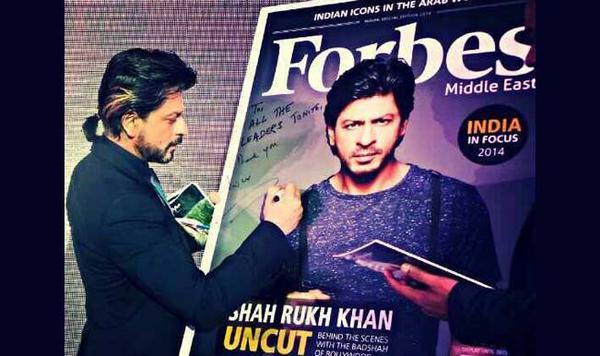 If someone asked you who is the biggest and richest Indian celebrity, you would probably end up confused between a couple of names. But the Forbes magazine has done away with all that confusion, with their list of Top 100 Indian celebrities. Guess who tops the list? None but our dear Shahrukh Khan!

With an earning of Rs. 202.8 crores in the last year, Shahrukh has earned the top spot, followed by Salman who comes in a sorry second. The country's darling cricketers are not to be left much behind, so cricketer MS Dhoni follows in the third spot and is closely followed by actor Akshay Kumar. Mr Amitabh Bachchan has won the 5th spot in this list and is closely followed by Sachin Tendulkar and Kareena Kapoor who are in the 6th and 7th spot respectively. Virender Sehwag follows in the 8th place and in the 9th and 10th place are Virat Kohli and Katrina Kaif.

So yes, its' just cricketrs and Bollywood actors in the Top 10. But SRK should be proud to have made the Forbes cover because this is the first time that an Indian celebrity has graced the cover of this mag!

Shahrukh Is The Biggest Celebrity Brand In India!

Celebrities Graced On The Cover Of Different Magazines May 2013

Celebrities Graced On The Cover Of Different Magazines March 2013

Bollywood Celebrities Graced On The Cover Of Different Magazines Feb 2013

Was your Holi a Green One?
LATEST EVENTS / GALLERIES
Most Read
...loading