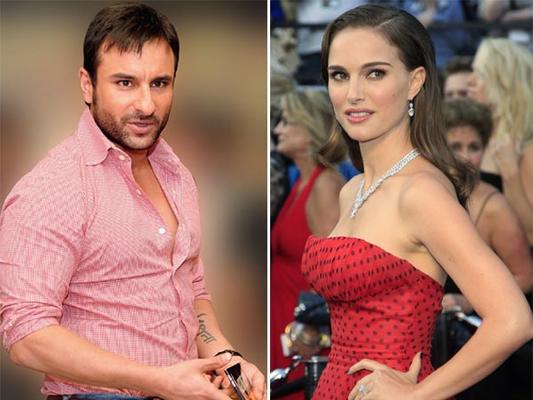 Playing a joker on screen is one thing, but joking about your work is a really dumb thing to do, especially when your jokes involve someone else. This is the lesson that actor Saif Ali Khan has learnt very recently. In a recent interview to the media, Saif candidly announced that he had been signed for a romcom opposite Hollywood actor Natalie Portman. The interview went viral and people believed it coz this wasn't just a rumour, it was news from the horse's mouth!

But as it turns out, it was nothing but a joke, a lie that Saif invented just to entertain himself and humour his Hollywood dreams. What a wannabe thing to do! We did not know that Saif ws so unhappy with his Bollywood career that he would resort to inventing such lies!

Anyway, the Oscar winning actor from Hollywood wasn't much amused by this gossip. So Natalie Portman's legal representatives have slapped a legal notice on Saif for spreading false stories and rumours about her.

Looks from the Academy Awards 2011

Saif Ali Khan At The Launch Of Fashion Brand Spunk

Saif and Diana Snapped at Imperial Hotel To Promote Cocktail

Saif and Deepika Talk To Anupama Chopra About Cocktail

Music Fraternity Were Interacted And Jokes With Each Other
Natalie Portman Latest Stills,Images