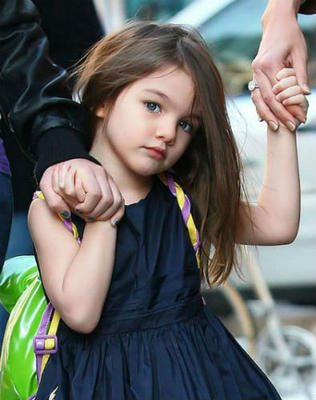 This little kid is Suri Cruise, the famous daughter of Tom Cruise and Katie Holmes. Suri has been adjudged the "World's Most Stylish Celebrity Kid".

This survey was run by a British family gifting website called twistedtwee. The poll saw 4 year old Suri win the contest effortlessly, leaving Beyonce and Jay-Z's six-month-old daughter Blue Ivy in second place. Will Smith's daughter Willow, who is 11, came in third in the survey and Lionel Ritchie's 4 year old grand-daughter Harlow came in 4th. Surprisingly, David and Victoria Beckham's 2 year old daughter came in 5th in this survey that was organised by a British website!

It is no surprise that Suri has been declated the most stylish star-kid. After all, she is the one who is famous for her 2 Million Dollar wardrobe. How can this high-maintenance child not be stylsih? We could have hoped to see baby Aradhya in this poll, if only ANYONE had seen a picture!!! Abhi-Ash, are you paying attention?