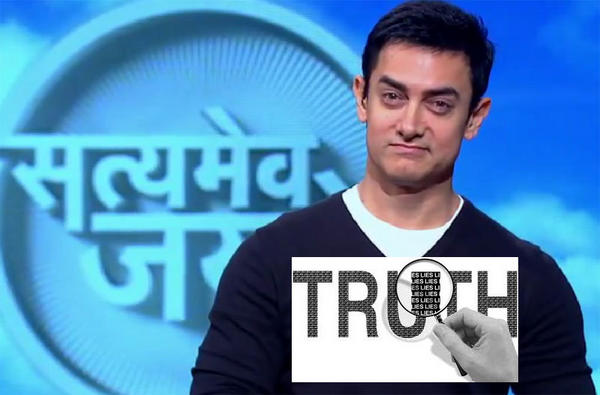 It’s very difficult to hear words like “FEMALE FOETICIDE, CHILD SEXUAL HARASSMENT, and DEATH CAUSED OF DOWRY, HONOUR KILLING “.We may have heard this word from any of the daily news papers or from any television show.   But, how many of us having the courage to raise our voice against it????

Now it is the time to break the silence. “ Satyamev  Jayate “  is a show of Mr. perfectionist of bollywood;  Aamir Khan and also his own production; through which everyone should experience the reality of our society.Till now the show has completed five episodes.In first episode, it is shown that how precious the girl childs are….But; no-body understand this.Every family wants a baby boy.Even if,many  high educated families  are doing the  girl child foeticide.In second episode, there are more than one cases where childs in our society are abused of sexual harassment by their own family members.In third episode, there are a bunch of stories of dowry cases which are happening not only middle class family; but also in upper class families.In the next episode there are some stories about our doctors whom we take as our second god. But, how the doctors are cheating the patients for money, any one can not believe this.In the fifth episode of the show, there are  very pathetic  real life stories on “ HONOUR KILLING “ .They are the people who have got married going against their family.Among them some lovers were being killed by their family members , because, family members did not want to marry in their own choice………

Let us watch the next episode…….What will be Aamir’s next step to rectify our society……….

Pros and Cons of Having a Single Child

Tips for Parents of Diabetic Children

Why This Barbaric Treatment of Girls in Our Country?

Bollywood Stars At NDTV's Our Girls Our Pride 2013 Campaign

Bachchan Family Pledge Their Support Towards The Girl Child

In all probability, Aishwarya and Abhishek child will be a Twin baby girl

What Happens When A Child Falls Into Gorilla's Enclosure?

Do you know how Mobile Phones are Made?
LATEST EVENTS / GALLERIES
Most Read
...loading