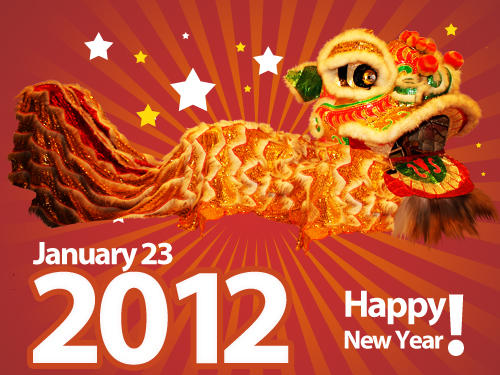 The Chinese New Year is symbolized by a new animal zodiac and they run in a 12-year cycle. Last year it was the Year of Rabbit and this year the more commanding beast "The Dragon". According to chinese, the Dragon is a symbol of good fortune and intense power and is regarded as a divine beast. Dragon also symbolizes supernatural powers.

For the Chinese, the dragon is the luckiest and most auspicious of all the animal signs. Those who born under this sign are regarded as innovative, passionate, colorful, confident and fearless people.

Here are some predictions for the year of the Dragon:

2)  The chart says, it Will be good for United States towards end of the year, but not so much for Europe which will collapse in 2012.

3) Russia and China are the best bets for financial investments in 2012.

4) India will become the center for entertainment in the world. Bollywood will become  much more popular worldwide than Hollywood.

5) Chinese Communist Party will hold its 18th Congress to select a new generation of leaders.

7) In 2012 humans will meet aliens and become “interplanetary friends”.

8) Americans which are famous for their eating habbits would “eat themselves to death” and this year Americans will become so obese that they can not compete with the rest of the world.

9) African continent will rise and China will make many deals with African countries.

12) The Mayans were right about the end of world.

Famous Indians Who Passed Away in 2012

Ranbir-Alia starrer 'Dragon' to get a brand new title?

Amitabh Bachchan will join Ranbir Kapoor and Alia for Dragon

Ayan Mukerji: Alia-Ranbir starring Dragon will not be a superhero film

Ranbir and Ayan teamed up again for a superhero flick ‘Dragon’?

Ayushmann Khurrana At GQ India Men Of The Year 2012 Awards

Best Dressed at GQ Men Of The Year Awards 2012

Celebs At The GQ Men Of The Year Awards 2012

Do You Love Chopsuey?

Chinese Now Buy Fresh Air in a Can!