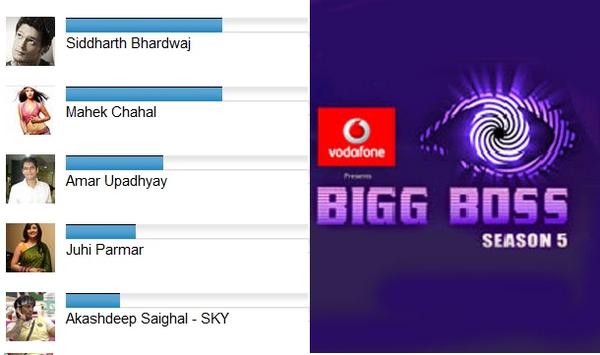 Viewers will have a hard time determine who will be the winner for the reality show’s “Big Boss Season 5”. The five contestants are moving forward for the big prize amount, which is Rs.10 million. The final housemates on “Bigg Boss 5” are Juhi Parmar, Amar Upadhyay, Mahek Chahal, Siddharth Bharadwaj and Akashdeep Saigal.

Juhi Parmar is the only house mate who is in the house from day 1, so speculations says Juhi is the most deserving contestants on “Bigg Boss 5”.

Meanwhile Siddharth Bharadwaj has also chances to win the title, as per Siddharth’s performance record he deserves the crown.

While Mahek Chahal back into the show it gave a shock to all the contestant. Buzz says Mahek Chahal unpredictable contestant when? & why? No one can predict. So she might be the winner for Big Boss Season 5.

Amar Upadhyay and Akashdeep Saigal are also in the queue. Both are giving strong challenge to win the race.

Season 4 – Hosted by Salman Khan, the winner is Shweta Tiwari

Season 2 – Hosted by Shilpa Shetty, the winner is Ashutosh Kaushik

Season 1 – Hosted by Arshad Warsi, the winner is Rahul Roy

OMG Oh My God Cast Meet The Winner Of The Contest

Katrina Kaif Spotted With The Winners Of The "Meet Katrina" Contest