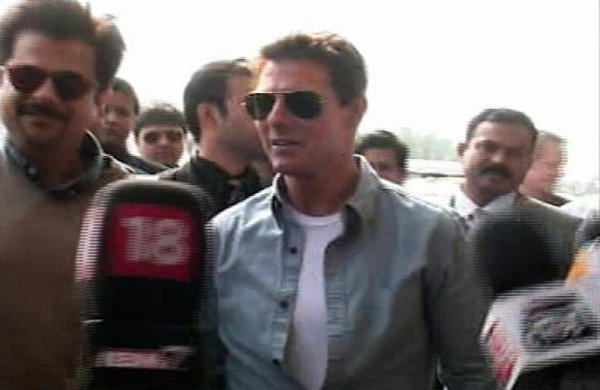 Hollywood icon Tom Cruise landed this morning in Delhi, to promote his upcoming movie 'Mission Impossible: Ghost Protocol'. After the 49-year-old actor arrived in Delhi, he went to the Leela Palace in Chanakyapuri where he is staying in the Maharaja Suite which has a private gym.

Tom Cruise who features as "Ethan Hunt" an intelligence agent in this movie series will also visit Agra. MI-4 co-star Paula Patton and bollywood mega star actor Anil Kapoor who also has a role in the latest 'Mission Impossible' movie was seen with the hollywood star.

Tom will be hosting a 3D special screening in at IMAX Wadala, Mumbai for 1,500 fans two weeks before the film's worldwide release Dec 21.

His wife Katie Holmes and Baby Suri is not accompanying him in India.

Hollywood biggest action director Paul Jennings: War is at par with Mission Impossible or The Fast and Furious